It was there. In the corner. On a white colored ceramic tile with few blue stripes. It remained there. Unmoved. Undisturbed. As if born to be forever, together. It seemed as if an undeclared bond has been created. Between the both. Like the gum and the paper.
I had no idea what it were thinking. But definitely I was. About the owner who abandoned it, unknowingly may be. How she had hurried yesterday night. Before leaving for her home.
The sweat drops that settled on her nostrils attracted me more than anything else. Her purple colored pendant matched with her watch. The watch which somebody had gifted, on her birthday she was telling to a friend. She wasn’t able to talk much in the beginning. Surprisingly the opposite happened as the evening progressed. Her laughter tinkered across the room. As if it was only she who was present. Or it was just me who felt so. The music, the cuisine, the chatter, the dance everything made the party so special. Particularly for her, being her first. Also for me. Being my most adorable.
They say if lady luck starts smiling she doesn’t stop. She giggles. And that’s what had happened. The party has been long over. She has left. So have others. But something remained. That only I could sense and feel. Luckily, all alone. It dazzled even now. As it did on her. Through the entire evening. Making her shine.


And it was there. On the ceramic tile with few blue stripes.Beside the mirror.
Letting me relive. The moments. The thrills. The attraction. The longing. I smiled, thinking how silly we humans can be. Ignoring people right beside us and remembering ones from their left overs. But what can we do. We are helpless. In the hands of emotions. That ties us even with remnants, if it wants to. And here it was something very unique that transformed me back into the evening of yesterday and let me bath in her aura again. What if it’s just a small bindi. 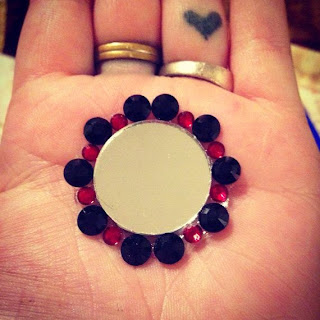 Linking up the post with Write Tribe's Festival of Words # 4 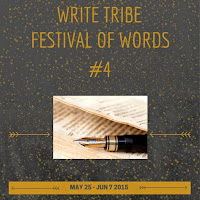 "Creativity" it is all around us....we just need to feel it.

This post was inspired from a bindi left in my bathroom by my aunt who had visited me few days ago:):)