Suhas’s old room mate had left and the land lady had assigned the room to some one new. Suhas was completely unaware of this person who was going to storm into his life unlike anyone else before .
So, his new roommate arrived with his luggage .
“ Hi.. I am Rohan “ he said with a smile .
“ Hello.. Suhas “ Suhas replied while shaking hands .
Things went on fine for just one night . But the real persona behind that gentle smile got unwrapped with no time loss .

Next day morning ….
Suhas : “ Rohan please come out of the bathroom soon ,I need to reach office a bit early today “.
Rohan : “ k…”
He came out after 45 mins after replying  “ k “ a numerous times .
Same day evening ….
Suhas : “ Please reduce the volume of the TV …I am not feeling good …want to sleep “.
Rohan : “ k…”
The TV continued to entertain it’s owner over more than an hour before finally deciding to go to into deep slumber .

After two days….
Suhas : “Rohan please don’t put your things on my study table , there’s no space to place my laptop”.
Rohan : “ k…”
But he never took his belongings .

Suhas to the land lady : “ Aunty I think I really can’t get along with that new person …please change my room or his “ he said in a pleading voice .
Land lady : “ k… just few more days beta …then I will arrange everything “.

Few more days passed…
Poor Suhas was left deserted in the same room with the same roomie .
So , Suhas decided …he had it enough . Either Rohan’s leaving or he’s leaving .

That day evening they had  a long argument and finally Suhas spelled out ….
Suhas : “ Just get out of this room” ….he said fuming in anger .
Rohan : ” k…”

Few more days …
Suhas came back from office . A feeling of disgust spread across his face when he saw that guy sitting on his bed and watching some irritating comedy show in a very high volume . 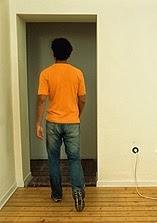