The night was dark and the wind cold . Looking out of the window a million thoughts flashed through her mind .

How things change . And people too . Agreements turn over into disagreements . Slowly giving way for indifferences to crop up .

It all seems beautiful till we come up to an age . To recognize to realize to interpret to understand . Unannounced a time comes when we start acknowledging those fine lines between actions and words .
When closer ones travel farther away and farther ones come close.
The woolen clothes in her body weren’t giving her warmth .

When a heart turns cold , things can’t warm it up .

Numerous times he repeated the same thing . This is how it is and this is how it’s meant to be .

But she never agreed . Being the fighter , the rebel she couldn’t just sit quite . Accepting things as it was . She knew if it wasn’t working out then it’s our responsibility to make it work .

Unfortunately who understands that . Putting the blame on luck or fate everyone escapes . Through a safe narrow path . Leaving us alone in hot noon or heavy rain .

And that’s when we get it . That’s the moment which speaks to us . Keeps us awake till late in the night .

When everyone goes to sleep a dreamer wakes up .

Same happened with her . Her aspirations didn’t let her keep down . It forced her , it coerced her , it compelled her to take that one step towards life . Her dream life

She knew he must be angry . How mad he must be at her . Maybe he can’t even withstand her for a single minute . But she will try . At least once . To pacify him . To let him go off all those piled up qualms .

The sun had already risen radiating sunlight around .  She opened her eyes finding herself in a new day .

And the train was nearing it’s  destination  . One of his favorite songs played in from somewhere among the passengers , may be from someone’s mobile phone . “ Tumko dekha toh , yeh khayal aya “ aah …she started missing him like anything now . The rest thirty minutes seemed more than the past years of separation .

How desperate she was . To hug him , to feel his warmth . To tell him that she cared for him much more than anybody else .

Reaching near the door steps she quietly kept her luggage down . Taking small silent careful steps she ventured inside .
Finding him seated on the rocking chair , she was assured nothing has changed . With closed eyes he was listening to old melodious Hindi film songs .

Lightly she put down the CDs she had brought for him on the table . Taking extra care not to disturb him she went behind his back . Putting her hands around his neck she said in a very low voice “ I am sorry “ .

His eyes opened in an instance . Taken aback by the sudden utterance he turned around . He couldn’t believe his eyes . Yes , she was standing in front of his eyes right there . Just right there.

After all a daughter is every father’s gem and father her best man . 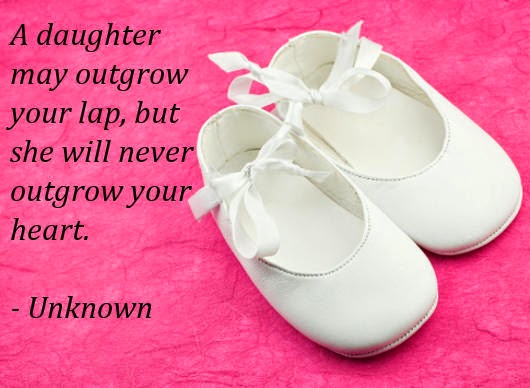 Today being a holiday for A-Z Challenge , linking up this post with Ultimate Blog Challenge
Enjoy your much awaited Sunday Friends :)